There was the award presentation ceremony of the business plan competition held last Tuesday in Akihabara by Mitsui & Co’s venture capital firm.

IT journalist Nobuyuki Hayashi, Satoshi Endo from Ascii Research Institute, and Takashi Betsui from CNET Japan were invited as judges for the competition’s awards, I attended the event because interesting persons came together to give their presentation on the stage. 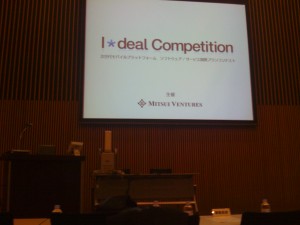 I wrote a story about the event, and contributed it to Asiajin.
“Akiba mobile app biz plan competition held by Mitsui VC”

（Proofread by Mr. Sean O’Hagan, and he corrected the story I’ve written in English.)

When someone becomes Japan’s new prime minister, there’s not so many event for the celebration.   But neither is there for the U.S. President’s case.

The traditional Japanese word meaning politics “matsurigoto” is stemmed from “matsuri” meaning festival or celebration, and I hope his inauguration makes something happen to get all the world out of recession somehow.   I know the fact is not so simple.

By the way, some Internet services broadcast live the inauguration.   (qik’s live is already introduce on the previous blog post.)

Ustream released its iPhoneApp, you can watch the live even with iPhone by downloading the App from the following link.

Unfortunately, WiFi environment is required to use the App.
(Perhaps in order to get an approval from Apple to list it on AppStore, it’s limited only to WiFi Use to avoid the overload to cellphone carrer’s network.   Not like Qik’s case.)

Both Joost and Ustream use the streams provided by TV stations, I think qik is much better to feel the atmosphere with so much presence that local citizens do in Washington.   (It’s available on my previous blogpost.)

The first image reporting US Airway’s aircraft which came down in Hudson River of NYC was taken by a passenger on the sightseeing ferry there, and it was posted to Twitter.

Cellphone journalism is in boom.

I wrote about qik on this blog previously, there will be two live programs with the application.

– Live: The Sundance Film Festival hosted by Ashton Kutcher and Kevin Rose
http://www.24hoursatsundance.com Starting at 1am on Saturday in Japan Time.

Availbale on the screen below.   Starting at midnight on Wednesday in Japan Time.
（The videos uploaded may be republished on CBS, BBC and Houston Chronicle.)

This year’s MacWorld would get relatively calmer because Steve Jobs was not on the stage, but there’s an event at SixApart HQ near the venue of MacWorld in San Francisco, introducing iPhone Apps made in Japan by the developers themselves coming from Tokyo. Led by famous IT journalist, Nobi Hayashi.

As of the time when I’m posting this message, there’re doing the presentation and broadcasting live on uStream as follows.

I was so surprised that I could eat “Takoyaki” or grilled wheat cakes with octopus even in Korea.   (Takoyaki originates from Osaka where I was born and grew up.)

(People call it “Muno Pang” in Korean.   I’m against the view that this is a kind of “Pang” meaning bread, on behalf of all Osakan people.)

When I was in Seoul last October, I was too busy to go to restaurant for the dinner, “Muno Pang” was my dinner on the day before OpenWebAsia’s event was held.

(Eating Oden at street stall is excellent in this season’s Seoul.    Korean expression of Oden has same pronounciation with that of Japanese.)

My Story covering the event is now on the web.

Taking a late lunch at Mansei, a popular beef restaurant in Akihabara with a good view. Now is the time of year-end, I’m very busy for greeting to our clients, which is one of Japanese seasonal business custom.

I heard that Kazuhiko Nishi would found a new university here jointly with Bill Gates.

He authored a book titled “Fake Democracy” recently, and it has been released by Kadokawa Publishing.

Should we call it a reflection of Pax Americana? Has Japanese entertainment business been made up by the United States after the World War II?

He unveiled some interesting but awful stories at Digicon Salon, which were not written in the book due to various reasons.

Every fact in the history is sometimes made up intentionally by someone who rules the country at that time.

He authored this in order to record every fact correctly for future generations.

I will enjoy reading it in the year-end holidays.

Then I was taken in the picture embedded on the column of Ms. Satomi Ichimura, who is a translator for TechCrunch Japanese.   (The man wearing a white jacket on the upper-left corner is me)

I got an e-mail announcing an event from Andrew Shuttleworth or tokyo2point0’s organizer.

He hosts a seminar in Shibuya for those who are interested in launching tech start-up.   Dave McClure, who is an advisor for several web2.0 start-ups and an angel investor at Founders Fund, will have a lecture there.

Unfortunately I cannot be there to listen in, because I’m drawing at a work in the year-end.

I get e-mails from many U.S. entrepreneuers, they say unanimously:

“We should launch start-up and start business in such a downturn time indeed.”

Even U.S. big three autos are getting harder to survive in these days, however, anyone who starts something new would be admired in any day.

Defeat recession, and I wish more Internet start-ups would be born in 2009 as well.

Founder of human powered search engine “Mahalo”, and also co-founder of Tech Crunch 50, Jason Calacanis is now in Tokyo, I was invited to his dinner party.

Everyone is witnessed often on the blogosphere.

I’ve posted several stories to Asiajin, I saw its organizer Akky Akimoto there for the first time.

One of TechCrunch translators, Takahashi-san gave me his brandnew book translated by him.

It was written by the founders of a San Francisco-based consulting firm “Adaptive Path”, and they’re famous as inventing the terms such as “Ajax” and “blog”.      I started reading it and I will post my comment on that later.

We did split the bill there, Kogai-san did not have enough amount of Japanse yen to pay, he looked so cheerful and paid in Euro instead.

Last weekend, Bank of Tokyo-Mitsubishi-UFJ stopped their teller machines nationwide due to the maintenance for large-scale scheduled system migration, I was not able to withdraw my money from my account, it causes lacks of Japanese yen in my wallet as well.   Only U.S. Dollar and Korean Won left.

I didn’t have enough time to attend the entire event despite it’s been held in my office’s neighbourhood.   I attended only the last session of the event.

This phrase reminds me of the blog written by Don Dodge, Business Development Director for Microsoft Corporation.    I think I’m not only one who remember that with the name.

Almost all of the panels at the last session were entrepreneuers and venture capitalists coming from Silicon Valley, they concluded basically “everyone should go to Silicon Valley for start up somthing new without fearing failures.”

On the other hand, in terms of advertising reach to large number population, China and India are very attractive.   That’s one of the reason why Google starts developing Android cellphone platform.   I’ve been feeling the emerging growth of China even at these kind conferences in these days.

I’m finishing my write-up because I’m a little bit busy today to prepare for an in-company meeting tonight and for contributing to a magazine.

Finally, I appreciate organizing such a great conference and the hard work of Digital Garage and Mr. Joi Ito, although it’s hard time now for them because Digital Garage showed 2.4billion yen loss in the previous accounting period.

Web 2.0 Expo Tokyo has been canceled, maybe New Context Conference is this year’s last one of this kind conference in Japan.

Thank all who got things done.