At 85% of Mcdonald’s Japan’s entire shop chains, “Mac de DS”, allowing Nintendo DS users to download software via in-store Wi-Fi for free, launched on June 19th. But it’s not been working so well.

Last Saturday when I visited Roppongi store of McD’s that the company has used for demonstration of the service, I saw an announcement paper telling the service is temporarilly not available.

And on Sunday, actually I visited Higashi-murayama store to chat with a friend of mine, but again I witnessed a paper as follows.

When it seems recovered, the store’s master came down to a child who is willing to use the service and appologized him for his inconvenience caused, because the guest service is McD’s first priority.

Softbank Mobile provides data carrier at McD’s stores for the “Mac de DS” service, and NTT-BP does it on Tsukuba Express trains. However, the presentators at a press briefing for this new service were McDonald’s and Nintendo, and two of data carriers of Softbank and NTT-BP are so quiet and inconspicuous.

Now that a number of mobile broadband service is likely to start here in Japan, and I think not businessmen but children may be main users who consume high wireless data traffic.

I just posted a story about the news for Asiajin, which is titled “McDonald’s And Nintendo Team Up To Call In More Minors”. Only several days passed since the new service launch, McD’s and Nintendo must be satisfied with the current situtation that stores are crowded with many DS minor users.

On the contrary, data carrier companies are perhaps confused with it.

Participants were walking and feeling the atmosphere, and reporting it on Flickr and qik.   At final phase of the event, I joined the team at Yasukuni Shrine. 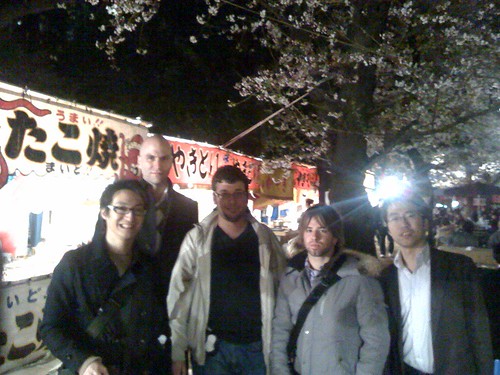 Feel a little bit cold and rainy.    I wish we could get off more and there could be many Hanami event here and there.

You can check out the event at Extreme Hanami.

We can find the financial term “taken over” in Japanese dictionary, but nor for its opposite meaning.

As for M&A meaning merge & acquisition, “merge” has feeling of neutral and the third-party view in it, and “acquisition” has a buyer’s perspective.

I think it is strange that both sides should be treated in equal but it is always mentioned with the buyer’s view.

A friend of mine, whom I used to get along with,  Takeshi Izuka founded a company called “Digital Forest” ten years ago, and it was recently taken over by NTT Communications.

Usually bid price is not disclosed for private purchase, but the company made it in public and we learned it was JPY2.4B.

For a company which raised fund money from VC companies, IPO and MPO used to be typical way to exit to the market.   But in these days when market condition is truly bad, their way will be getting more natural.    We have a number of examples that a venture takes over another venture in Japan, on the other hand, NTT-like traditional companies used to take over no start-up company.

The following picture is Mt. Fuji seen from Yamanaka Lake where I visited last weekend.   It was sunny sky but zero degree Celsius and snowing powderly in the morning.

A meet-up called “Beer & Blog” origins Portland, Oregon which is the heart of the open source coummunity.   Its first Tokyo edition was held following the cities like Las Vegas and St. Lewis.

Everyone is chatting with having a pint of beer in the hands.   The meet-up is held every week at a beer pub.   If you’re interested in attending this, please check out the website of Tokyo Beer & Blog for more details.

Attendees celebrated the 1st meet-up at Hobgoblin in Shibuya, which directly imports a number of casked UK beer having the same name with the pub’s.

On that day, the German-headquarted venture Jimdo started its Japanese service jointly with KDDI, and I had a chat with Serkan Toto, who is a German national and attended Jimdo’s press briefing at the German Embassy.

It is not a revolutionary but convenient service because we can create our own sites without setting up web server and CMS.

Some people call it a kind of Web3.0 service.

chi.mp is also categorized in this sector, which I saw at a meet-up in L.A.

I received a beta account for Fotonauts today, almost six months passed since I saw it at TechCrunch 50 last fall for the first time.

I will enjoy playing it tonight.

There’s a project in which people think how the local journalism should be, and they created a book written by 100 authors.

There was a meet-up and party to celebrate its publication at Rikkyo University.

It was written by press people, reporters, journalists and students who intend to work with broadcasters.

The book will not be top sellers, but you can order it at any book store in Japan because the distribution number is assigned to specify the title.  It will be also stored at the Japan’s National Diet Library.
(ISBN 978-4-9904629-0-1)

When I received an offer to contribute for the book from a friend of mine, I was in the United States and heard many news stories about effects of recession.   That’ why I wrote some pages of how the Internet venture companies can contribute for the world to conquer the recession.

Many people working with press industry think so seriously about how news media should change its business model.

They have planned to hold it at a cafe restaurant in Aoyama, but the intended  attendees exceed 200 people, and they were forced to change the venue to another cafe in Harajuku having enough capacity.

Andrew made so many efforts to arrage it.   Appreciate his job.

As you can imagine from the title of the event, it’s a meet-up for the people from various business categories including CGM (consumer Generated Media) related developers and users.

Tokyo is the great city, I believe.   Because, we have a great community gathering such a great number of people.

Viral marketing (by word-of-mouth) will contribute to promote our new products and new services than the mass-media advertising can do.

Here is the short introduction of Danny Choo.

On March 12th, I had a talk session at the Enterprise 2.0 / SaaS Study Group of the Internet Association Japan,  and reported FASTforward ’09 which was held in Las Vegas last month and I attended.

FASTfoward is an event specifically focusing on the Enterprise Search solutions, but most people talked about today’s enterprise IT trends such as changing  the way of working and the clouds.

You can see the live coverage of the event at the organizer’s my page at http://myff09.com.   (You can find a promotional code to sign-up for free, and it allows you to login to see them.)

Besides, my story covering the event will be on the next edition of IT Leaders Magazine.

It was snowing and the doll festival day.   Tokyo Takanawa Rotar Club held its monthly meet-up in Shinagawa Prince Hotel, where I was invited as a guest lecturer.

I don’t find the difference between two groups of rotary club and lions club.   I made a presentation about the gap between Digital Natives and Digital Immigrates to noted persons attending.

Regarding “Digital Native”, NHK was broadcast a special program on it and the term got better known.   It stands for the generation of the people who experienced in touch with PC and the Internet when he or she can remember.

(I’m not a digital native, neither.   It was my eighth grade when I used a device called micro computer for the first time in my life.)

There’s no one who belongs to the Digital Native generation in this evening’s attendees.

It’s not for emphasizing the generation gap, but we have to understand the gap and live in the community, the working style is changing definitely.

It was very hard for me to explain about the cutting-edge IT trends enough to make themselves understood in a very short time.

A musician and an attendee had interest in the story about Sound Code (previously I covered it on Asiajin).   I think this technology will be deployed to its practical use in the very near future, which will replace QR code.

There was a meet-up of the presentations by the iPhone app developers at Apple Store Ginza.

It was crowded because Ryuichi Sakamoto also had a session following this meet-up.   I didn’t have enough room to take a note, but recorded it with qik.

(In its final part, my camera were looking towards the ceiling as opposed to the presenters.)

My first trip abroad in my life was that to Singapore.

That country is one of my favorites, while we may be sentenced to flogging if something illegal involved there.

Changi Airport has Koi Ponds in the premise, and for those who frustrate waste of time for transit at the airport, they have a free invitation tour to Singapore Zoo, which are absolutely different from the facilities and the menus prepared at LAX where I missed my flight last week.

# At LAX, all the lockers and baggage storages have been removed since “Sep 11”,
# and few restaurants are located in any buildings other than Tom Bradley Terminal.

Actually they’re celebrating it but only broadcast the videos on which the world’s business leaders congratulate it, that is also different from the fact that most Japanese TV stations also celebrate their 50 years old by increasing variety show programming broadcast.

I launched an application called TVU Player In the iPhone, and I watched Channel News Asia with the application while doing my job at a coffee shop in Roppongi. Then the station started airing Japanese popular travel program introducing hot spring resorts locating nationwide.

This was produced by TV Tokyo, and Channel News Asia adds English subtitles on it and broadcasts in the sponsorship by Sumitomo Corporation, ANA and NEC. The programming is named “Japan Hour”.

As being endorsed by Japanese foreign ministry, the state-running broadcaster NHK finally started its English worldwide programming last month, but I think the travel program on Channel News Asia would be more effective for making results of the government’s running “Visit Japan Campaign”.

Moreover, without being asked by Channel News Asia, TVU Player is streaming the programs on the Internet.

I don’t know how much NHK pays for renting satellite transponders, but if they could stand on the position as one of contents providers like Kadokawa, they should approve of the content reproductions on the Internet.